Anima Gallery presents a solo exhibition by Mauro Perucchetti. The exhibition entitled ‘Resinification’ showcases a number of colorful, highly selected works – mixed media and sculptures – by the internationally renowned Italian artist. The title of the exhibition ‘Resinification’ is inspired by the artist’s unique use of resin as a main medium for all his artworks.

Perucchetti’s work unites Pop aesthetics with social comment, addressing some of the most pressing and difficult issues in today’s society in a way that is playful and accessible, without being shocking or obscure. His works reflect the contemporary social environment in which we live. To a viewer coming for the first time to the art of Mauro Perucchetti, the impact of his meticulously crafted, richly colored works is at once exuberantly visual and sensuously tactile. Perucchetti creates objects which are political, cartoon like and steeped in the language of consumerism; but the basis of their effect – their aesthetic and conceptual trigger – is created through the artist’s unique use of resin as a medium for sculpture. Indeed, this adaptation of a material at once liquid and solid, transparent and vibrant, is the physical summary of Perucchetti’s entire creative idiom: that which appears brightly and benignly colored, simple, innocent and welcoming to the touch, is also eloquent of violence and destruction, charged with social comment, and descriptive of a contemporary world in which superficial appearance is used to mask and beautify ethical and spiritual dereliction.

To achieve the translucent lustre of his works, Perucchetti is obliged to work with processes that are technically and chemically hazardous. And from this a further conceptual irony emerges: appearance and meaning are continually reversed, creating an artistic language in which aggression is prettified and childlike innocence is encoded with violence. In one sense, the art of Mauro Perucchetti can be appreciated as educational toys for a world out of control.

The vivacious infantilism of Perucchetti’s work, therefore, is the result of intensely difficult, dangerous and time consuming craft. That which appears pure and simple is the consequence of its opposite: toxicity and hard labour. And in this Perucchetti displays a delight in visual and conceptual games; he uses the colors and textures of sweets (at times even their names, ‘Jelly Baby’) to reveal the portent and absurdity of social and individual vanity, aggression and prejudice. To this end he engages with themes such as war, cloning, police brutality, fashion, addictive consumerism, drugs and media.

The colors favored by Perucchetti bring to mind synthetic flavors: lime, lemon, strawberry, orange. One might remember the story by Colette, in which a newly engaged young woman, presented by her fiancé with a large, exquisitely polished ruby, has the sole desire to put it in her mouth to see if it has the taste of a boiled sweet. In the art of Perucchetti, these games with the hues and textures of confectionary are played to pass comment on the rhetoric of cultural materialism. Populations (Perucchetti might call them ‘POPulations’) appear easier to control if they are sold the illusion of saccharine comforts, and soothing benevolence.

But Perucchetti is equally concerned with the sculptural qualities of texture – in particular notions of pristine surface and stark, minimal elegance. As an artist he prefers to work in the idiom of an aphorism: each work makes its comment with elegant precision – a neat political bon mot. Thus, in ‘Luxury Fix’, we are presented with what might be a department store display of glitter filled, designer drugs to induce a sense of la vie deluxe. It is a work which defines the quality of science fiction in Perucchetti’s art, and makes a short dystopian fable of each piece. (One might easily imagine Perucchetti’s art appearing in a novel by J.G.Ballard or Anthony Burgess, in which the relationship between horror and aesthetics has become ironically contorted. Warheads the color of fine Venetian glass; long swords engraved with press cuttings, their medievalism further usurped by brightly colored, toy like handles.)

We might see Perucchetti’s love of texture and surface in the work of Jeff Koons for example; or his delight in the sensual shapes of mass production in the paintings of James Rosenquist. But Perucchetti is not concerned with joining an art historical movement, in terms of making art historical references. His intention is rather to deliver a love letter to the viewer, written in the language of form and color, yet bearing some uncomfortable truths. 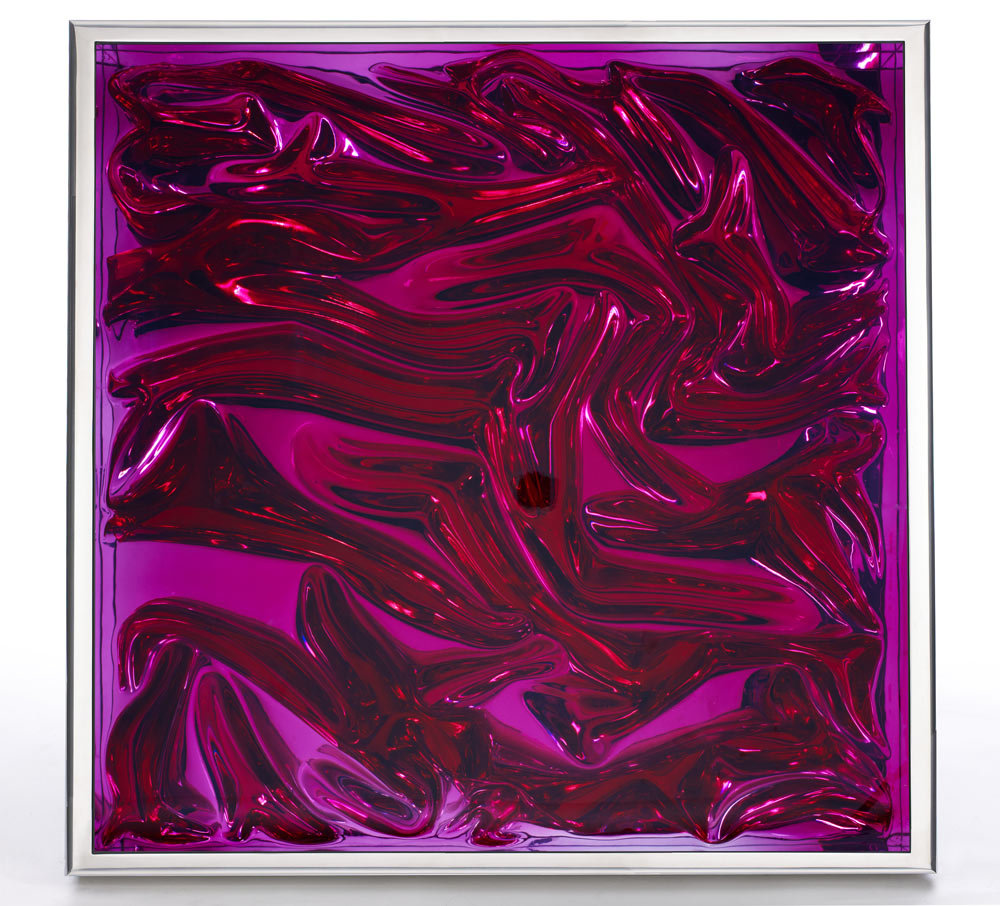 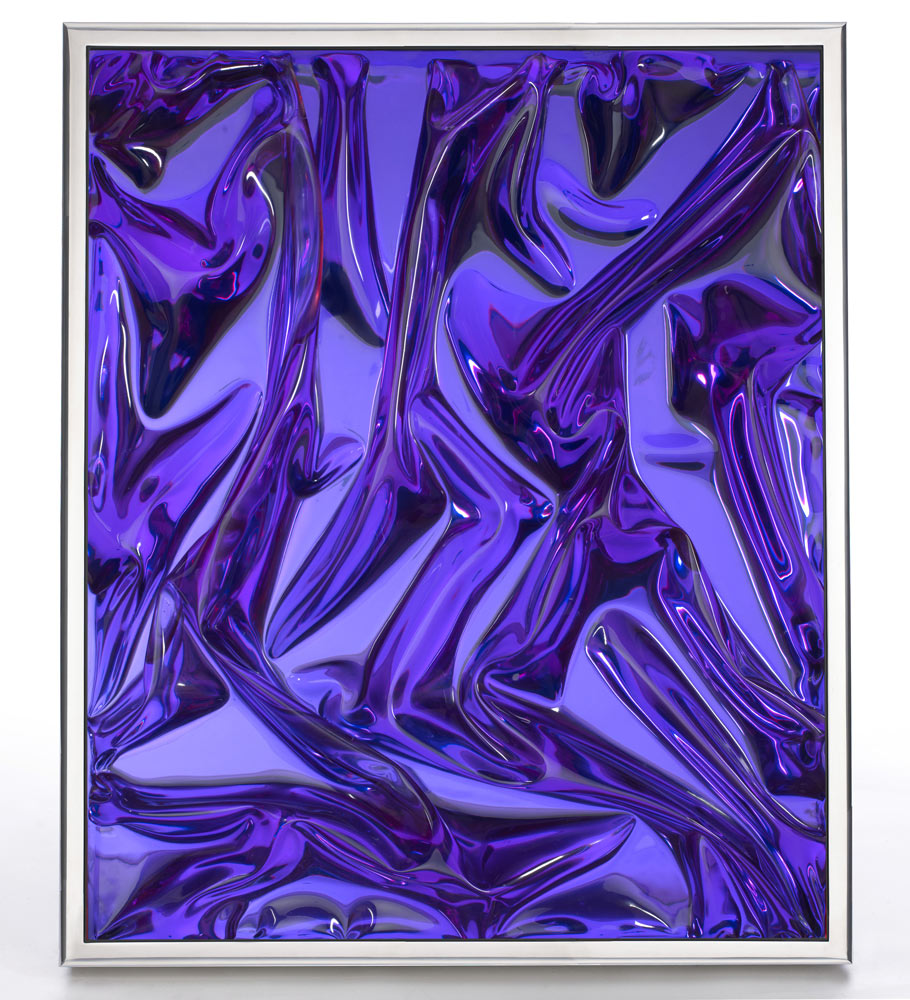 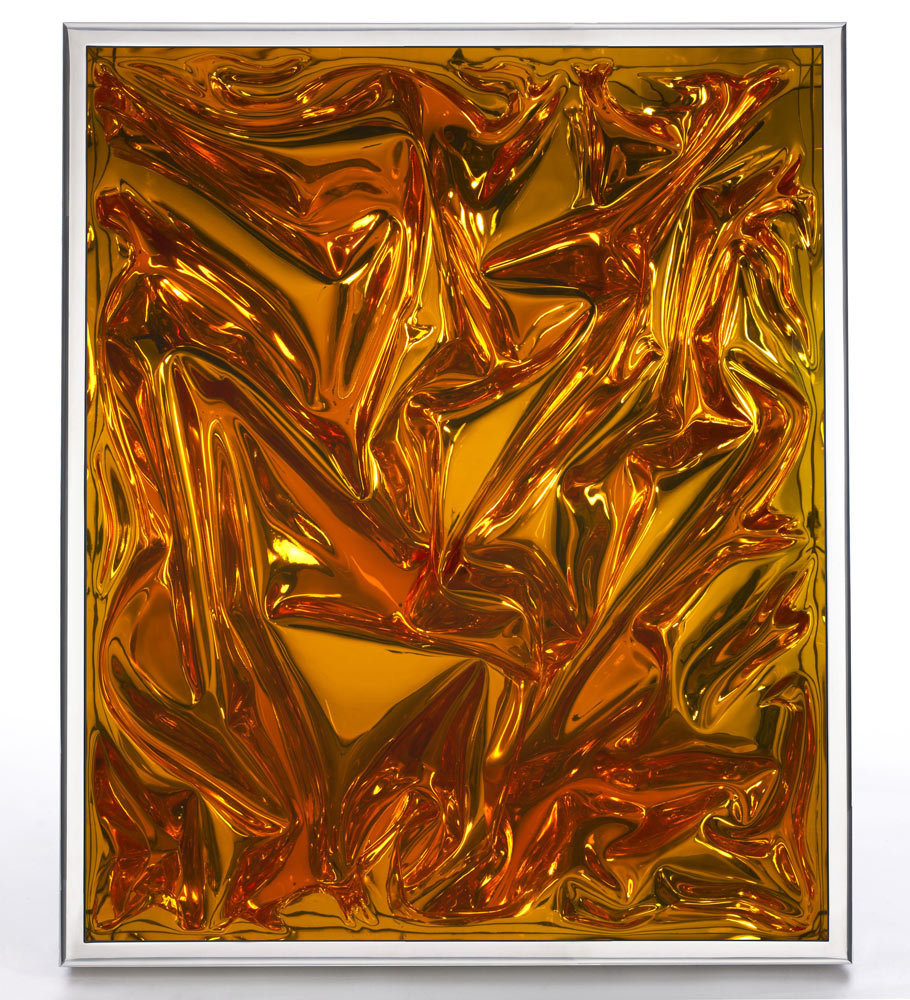 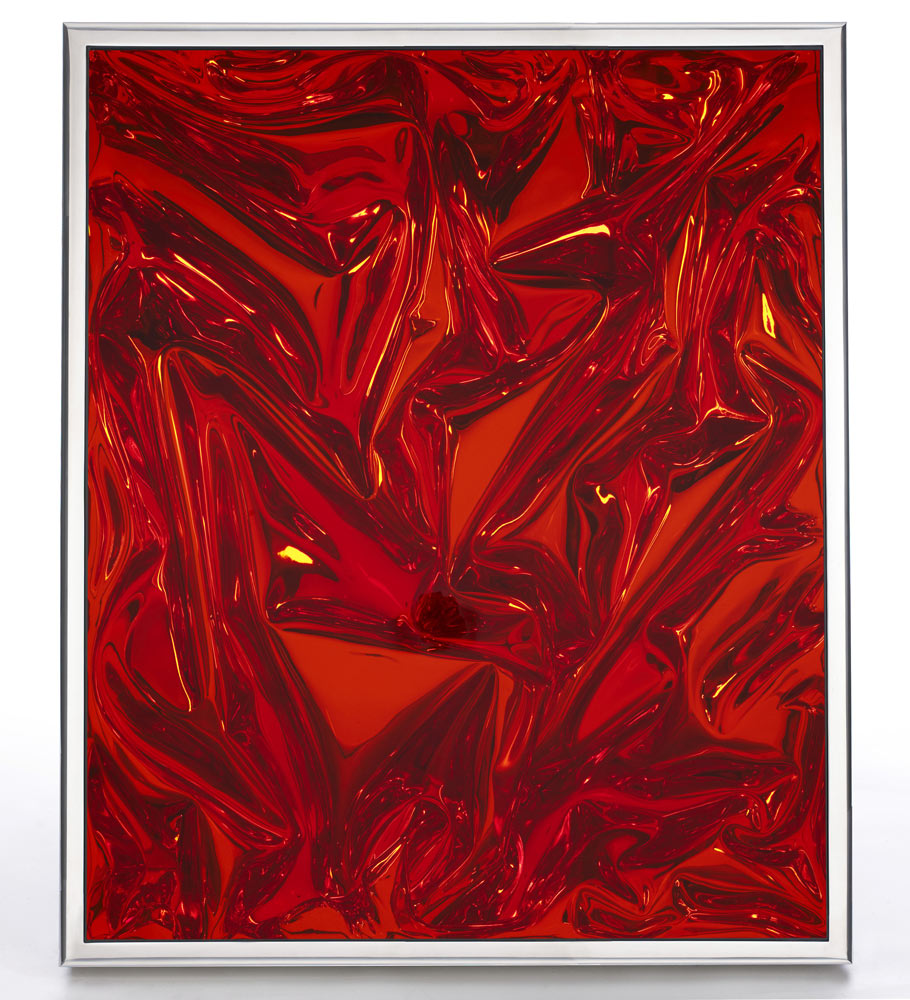 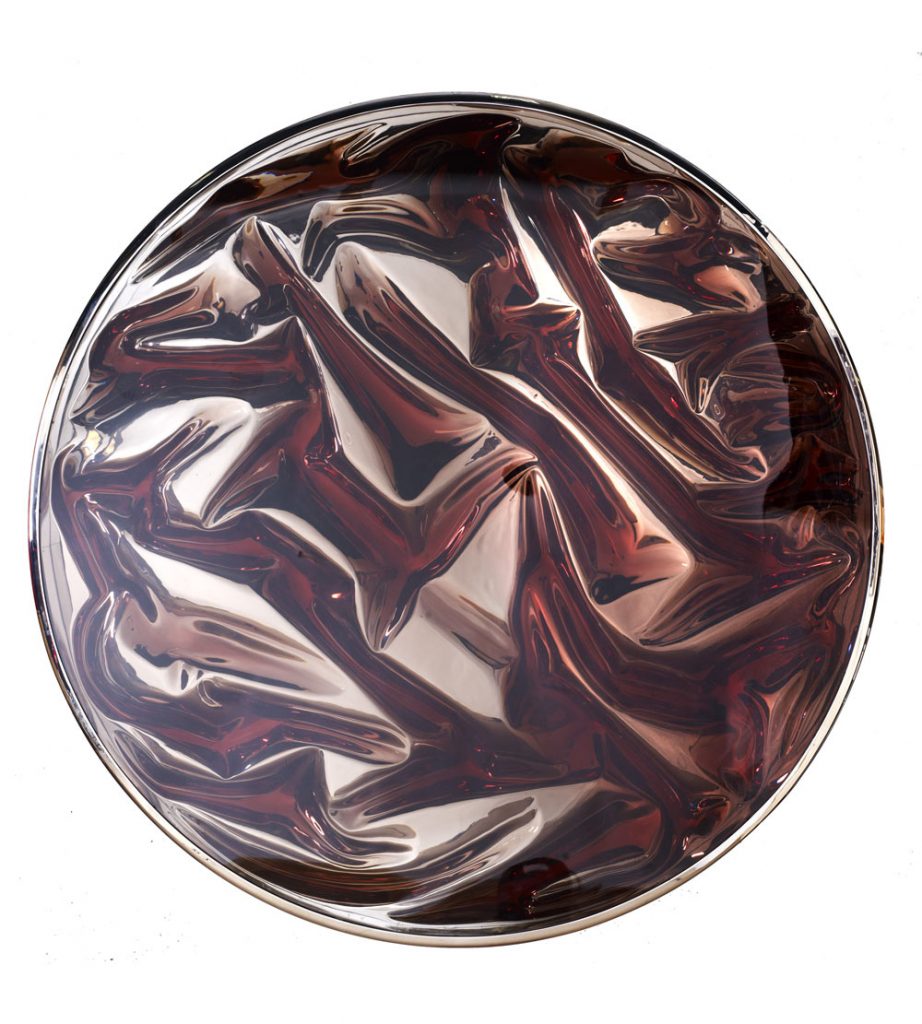 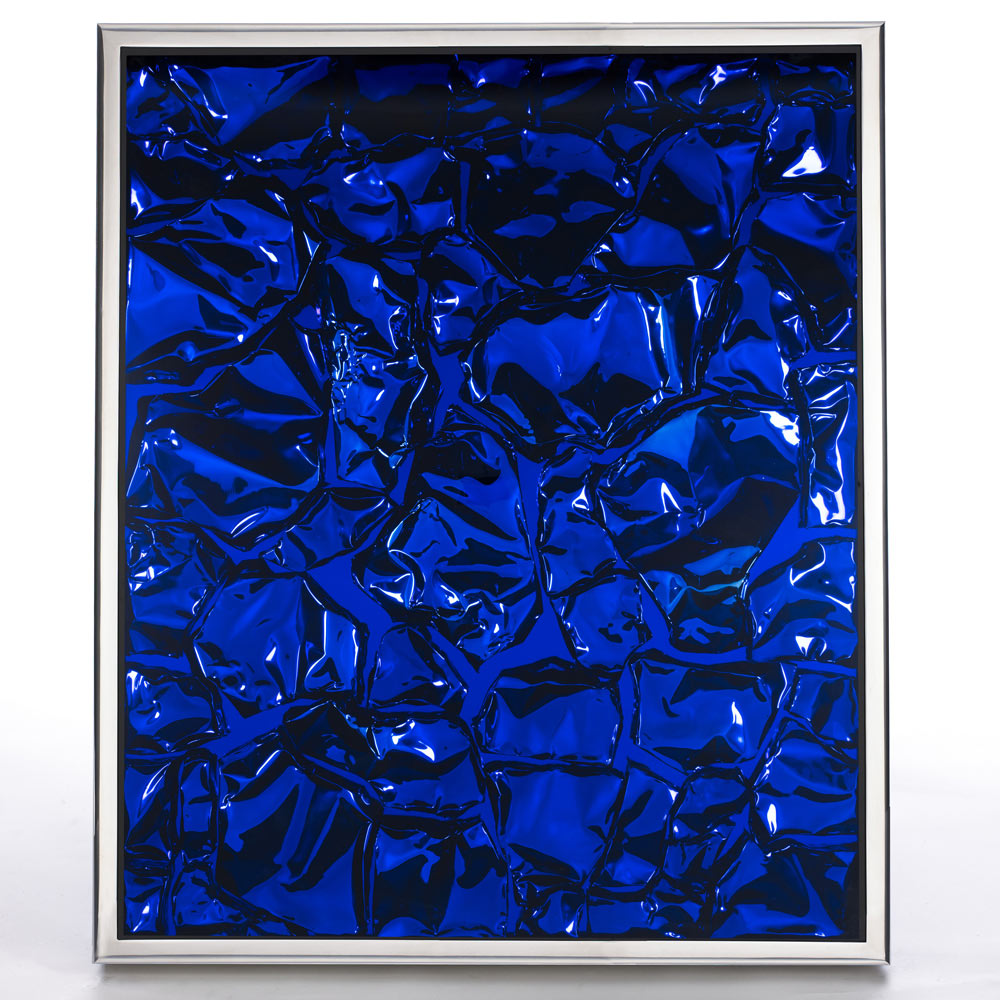 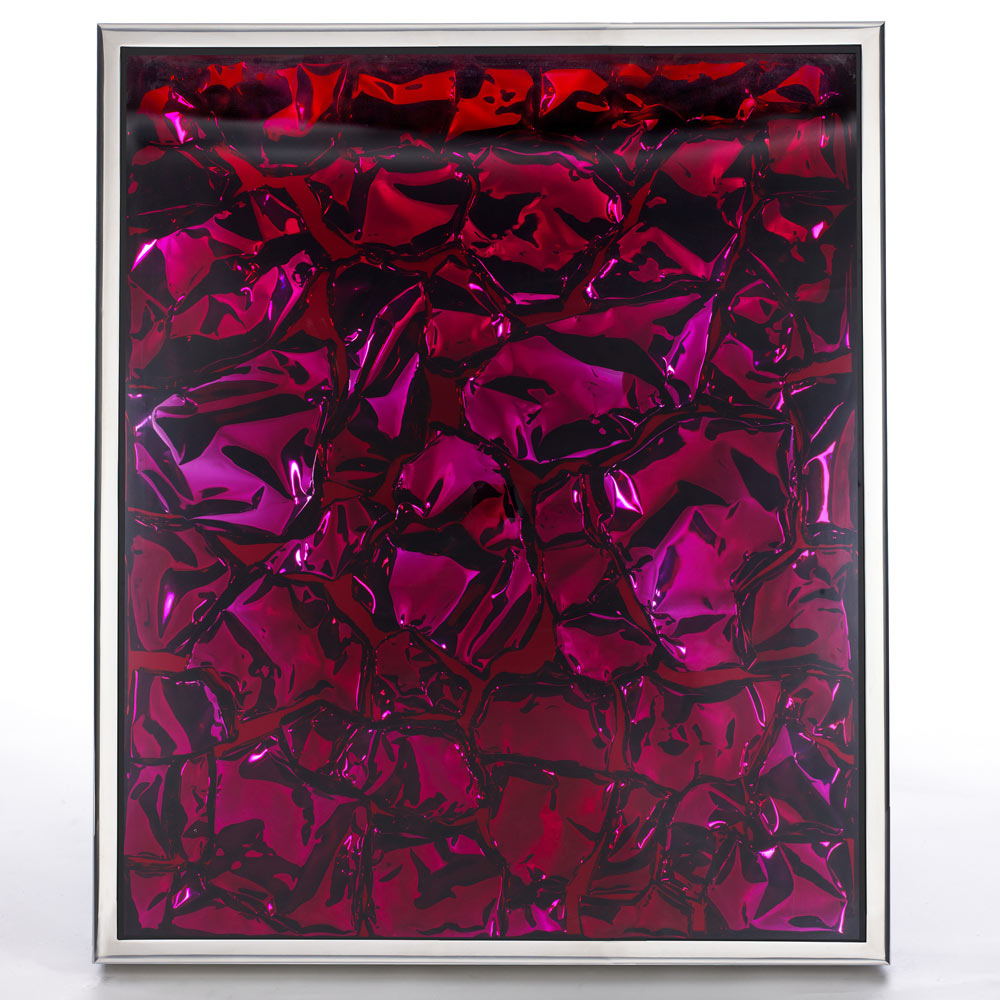 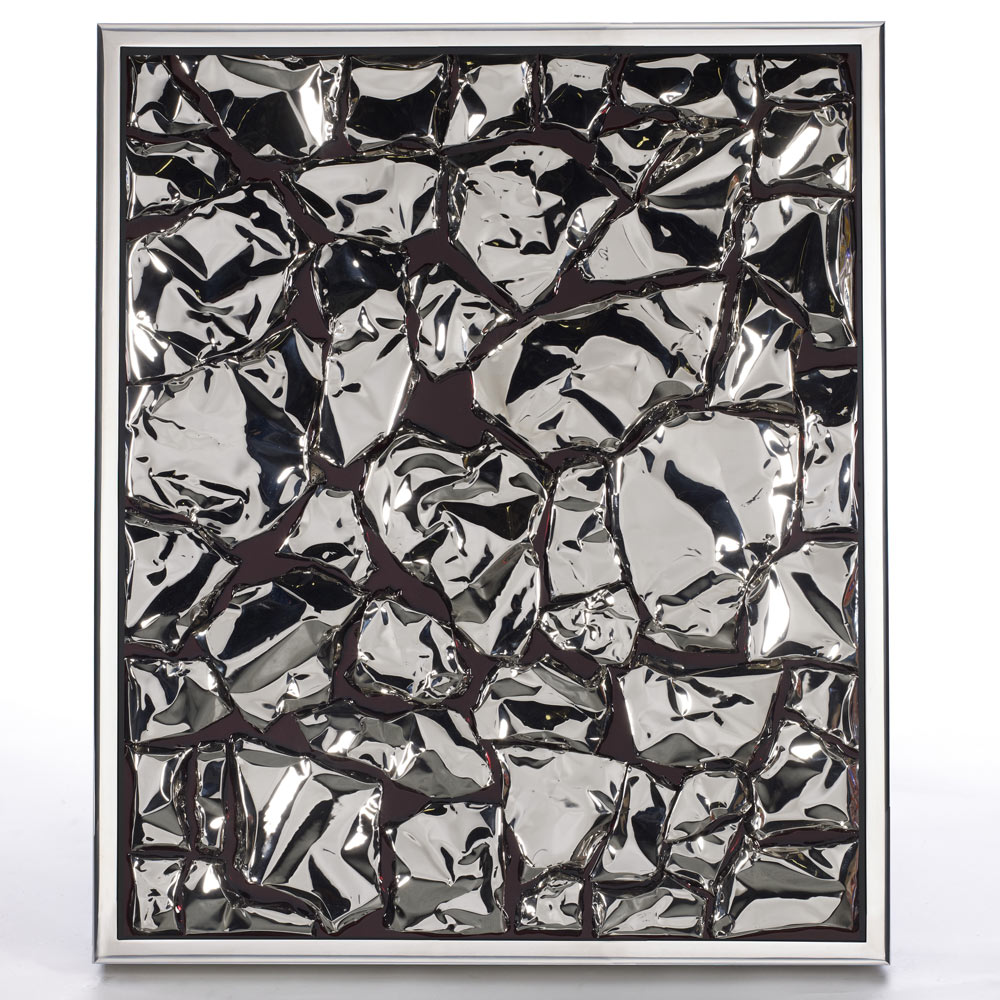 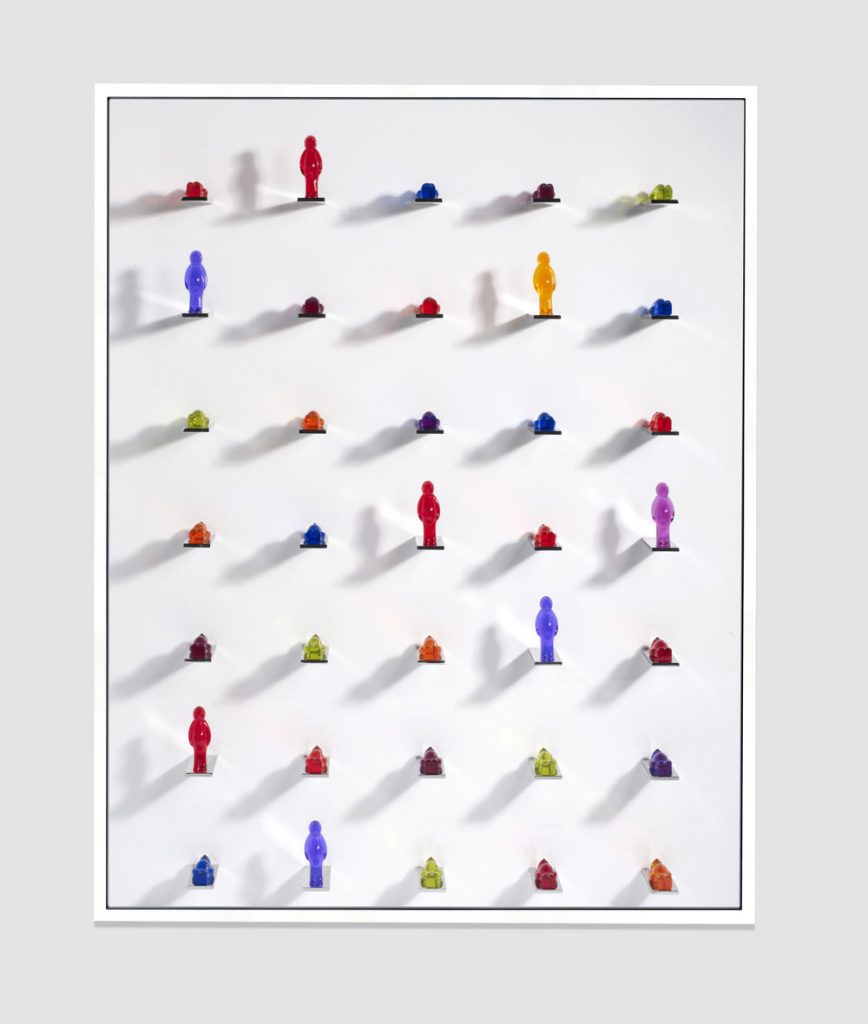 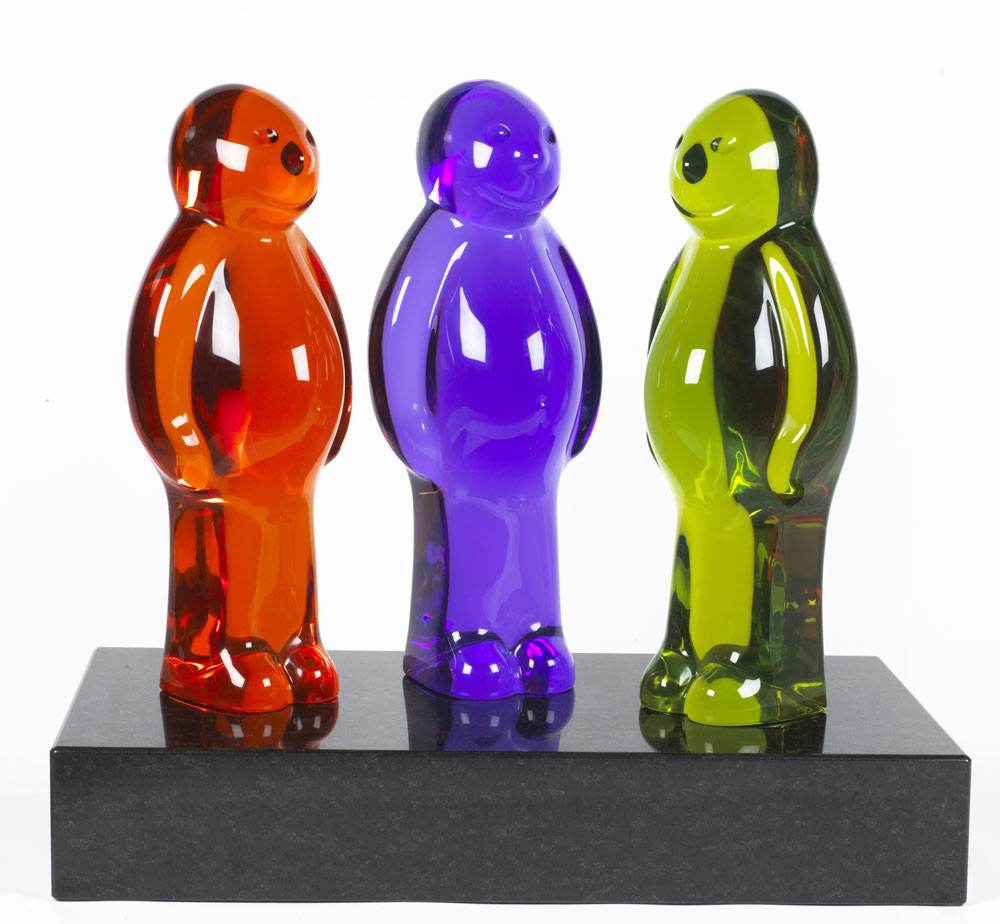 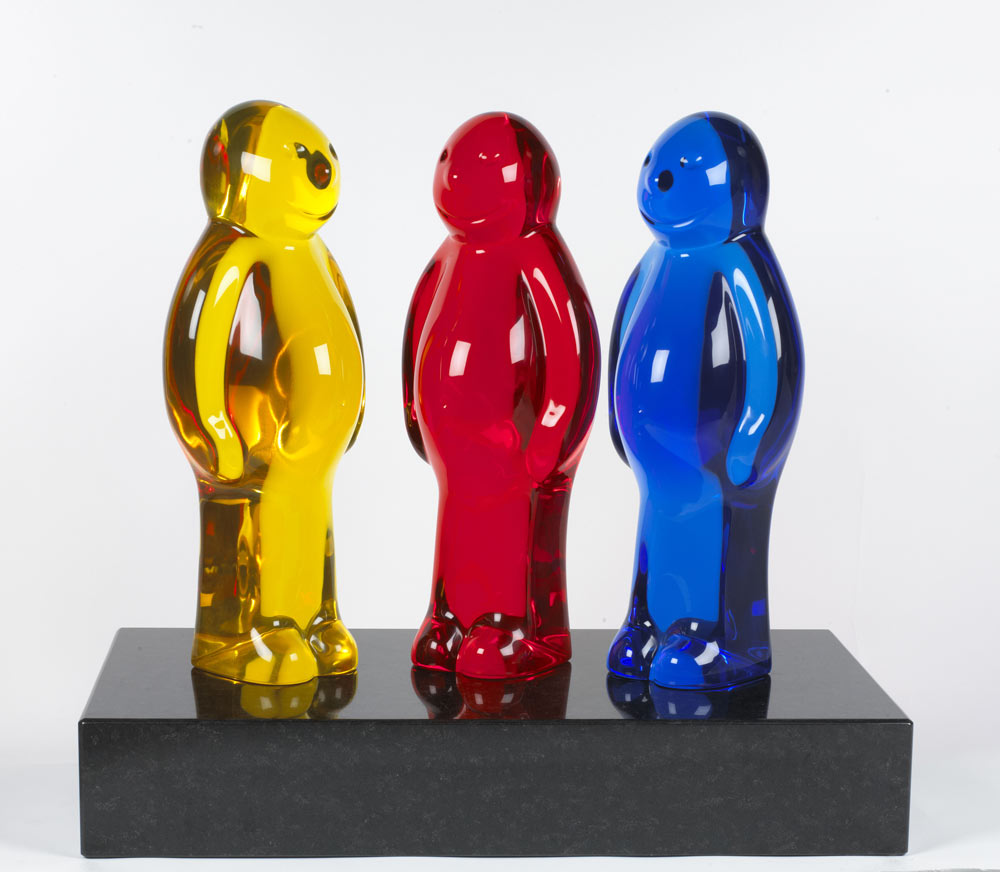 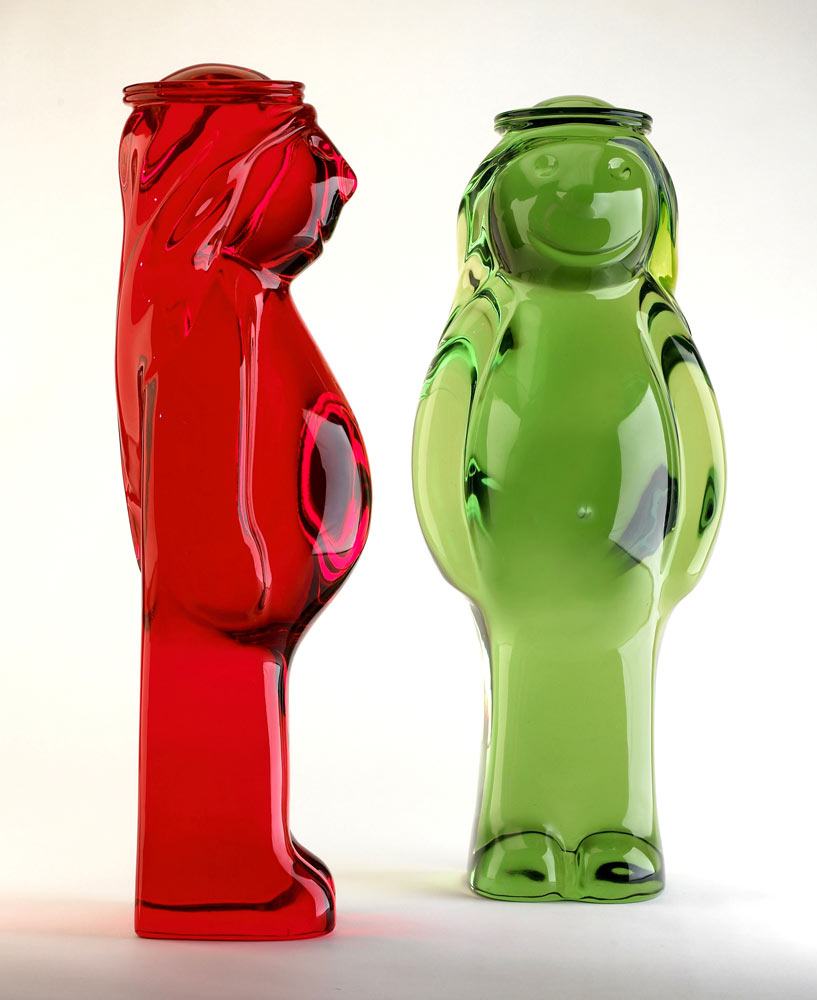 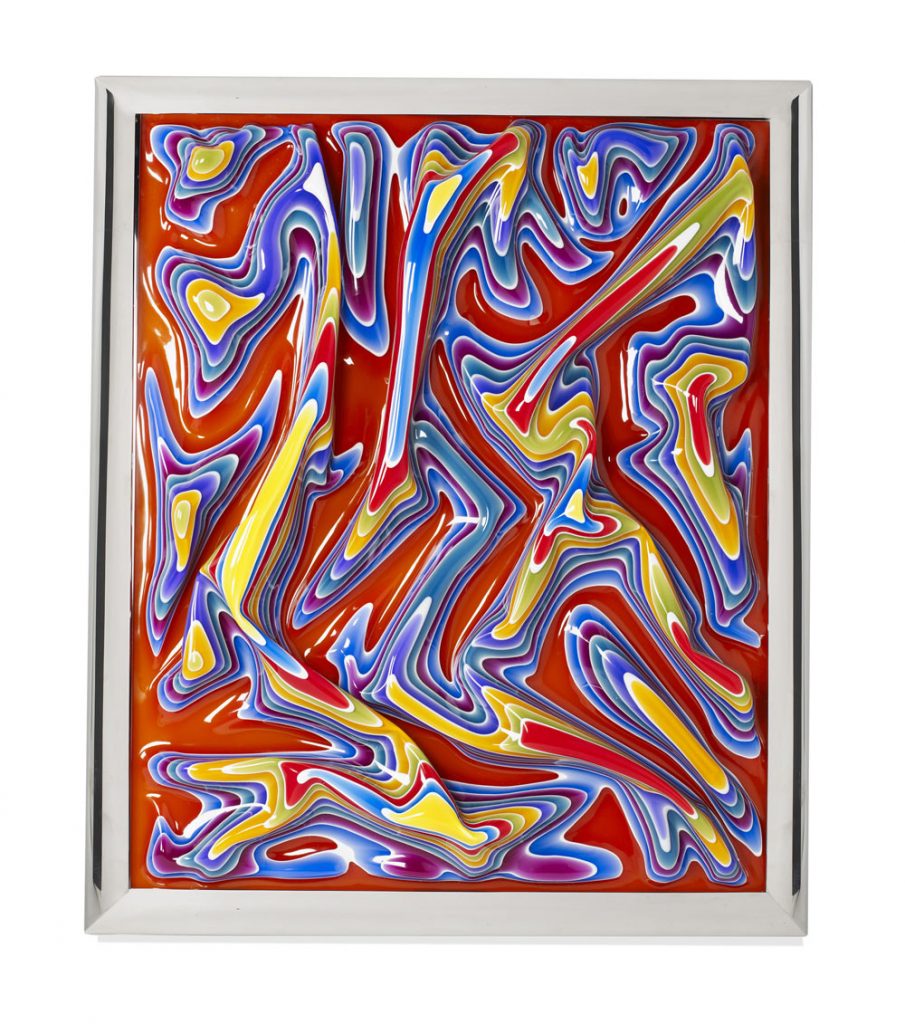 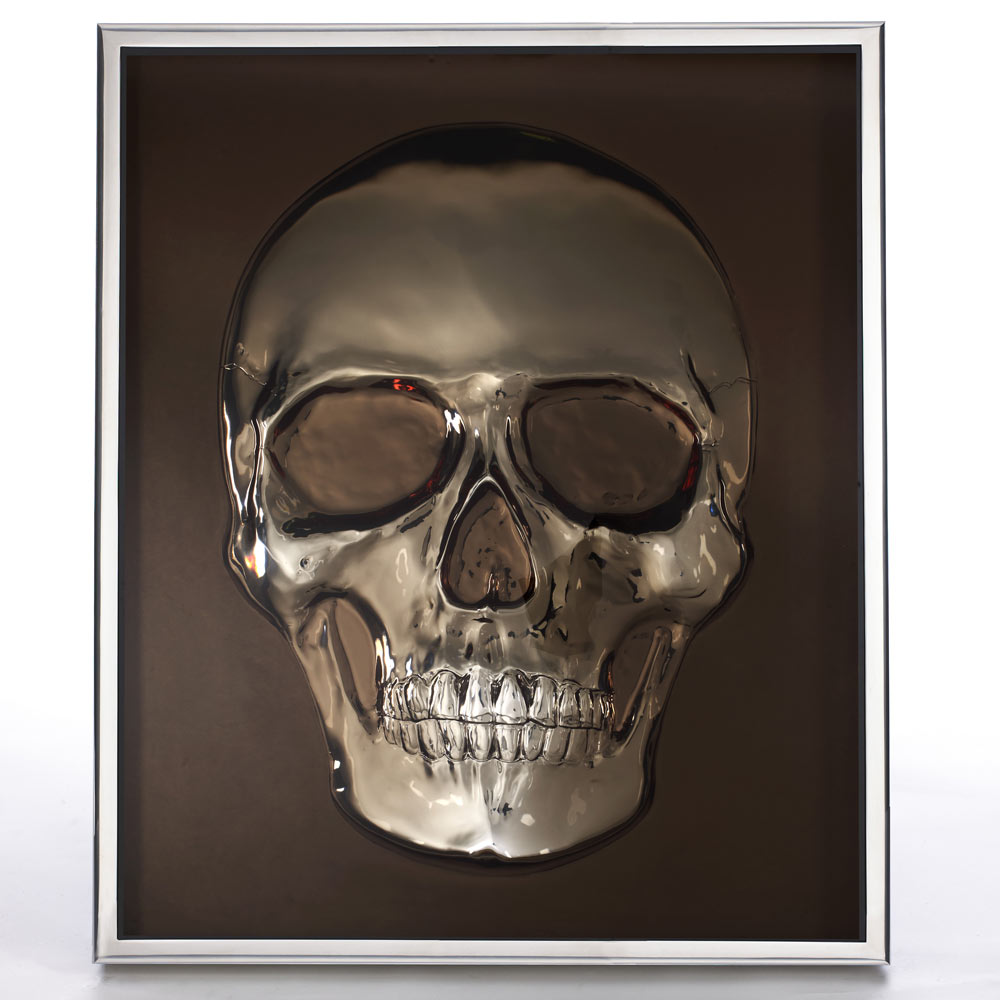 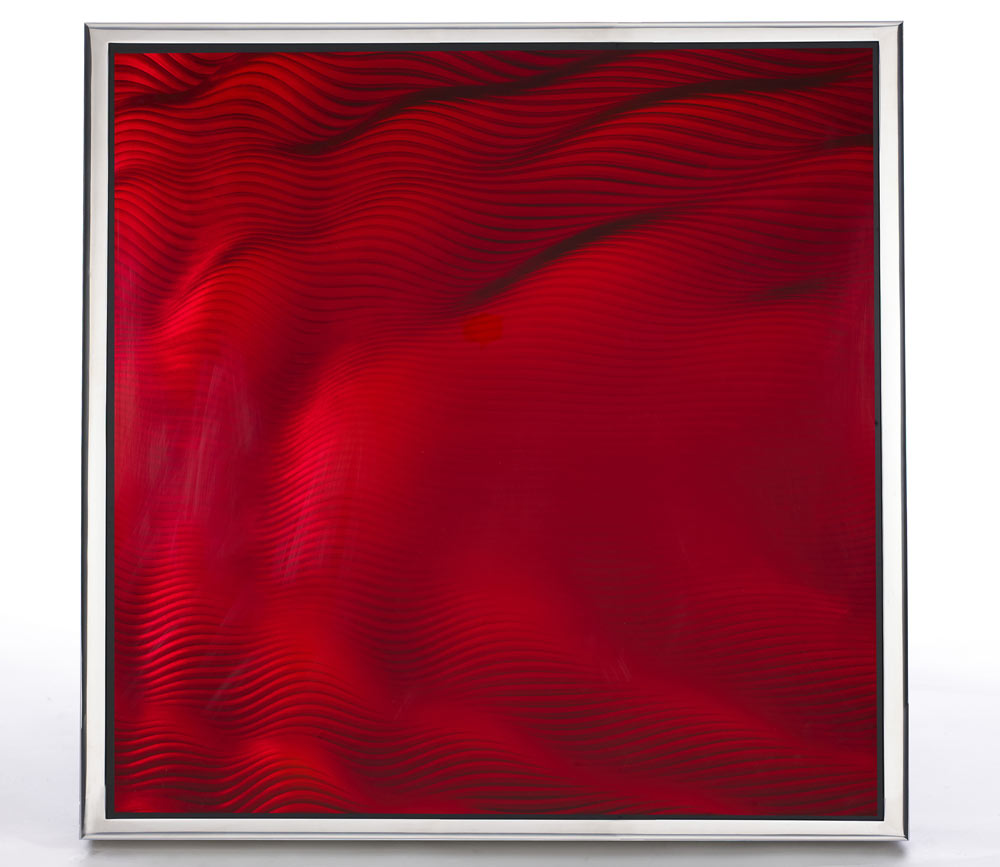 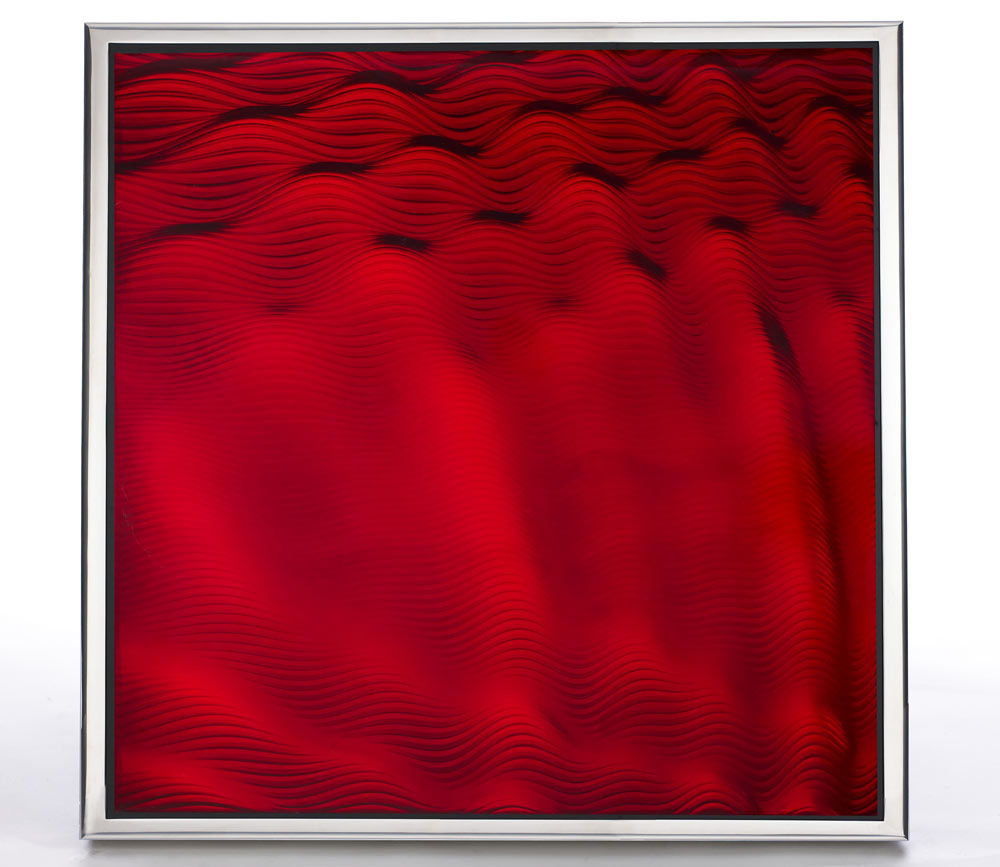 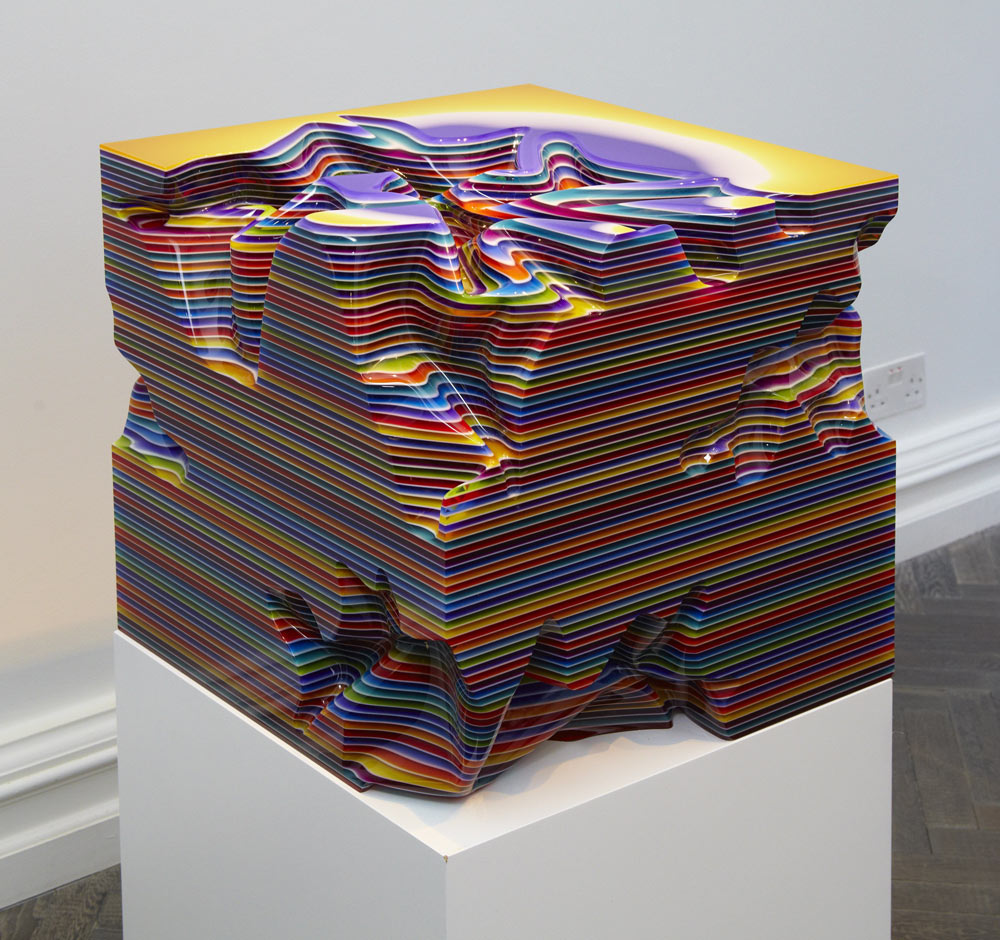