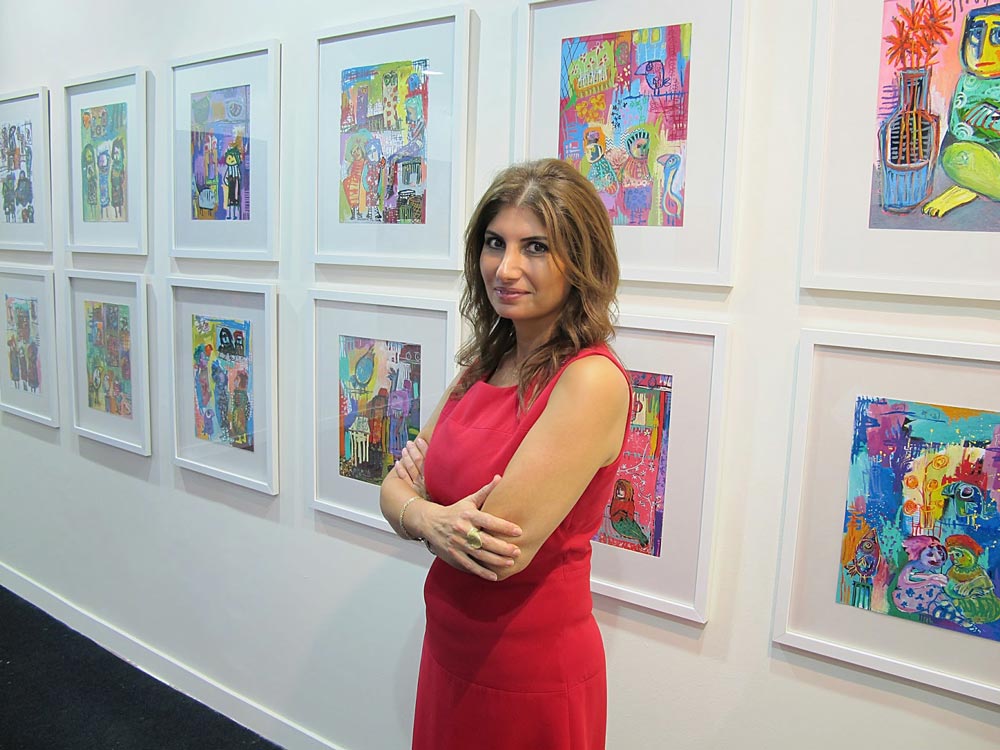 Born in Lebanon in 1972, Manuella was brought up in an artist family and early on developed a passion for storytelling, cartoons and animation. As a child she spent most of her time in her father’s studio, renowned artist painter Paul Guiragossian and he taught her how to create flip books and how to be creative with her ideas. Gradually Manuella started getting a more serious formation and training in figure drawing, painting portraits and landscapes but her love of cartoons never faded away.
In 1989 at the age of 16, she held her very first solo exhibition of 13 cartoon characters named “Les Archifous” in Paris. In 1993 she briefly attended the Academie Libanaise des Beaux Arts (ALBA). In 1997 she realized one of her longtime dreams of learning animation and in 2002, she graduated from the California Institute of the Arts with a BFA in Film and Video, specialized in Character Animation. For over two decades Manuella has been participating in numerous group exhibitions, art fairs and solo shows in Beirut, Paris, Los Angeles, Abu Dhabi, Muscat, Amsterdam and Singapore.
Her current work is based on her childhood drawings created throughout the Lebanese civil war. As Manuella started drawing way before she could write her own name, her father Paul had signed and dated all her earliest drawings, and preserved them in his studio. After her father passed away in 1993, Manuella took on the great task of archiving his works, and during that process she discovered her childhood drawings, archived by her father over the years. This finding gave her the confidence she needed to pursue this idea of going back to her childhood art and unlike other artists who express their protest against war by creating scenes symbolizing violence, Manuella chose to show resistance by creating works with childlike simplicity that express joy and positivity. She says, “A child’s imagination and unconscious are so strong and honest that there is not much need of symbolism to communicate an idea. It’s pure and simple and naturally beautiful. This is why I constantly try to tap back into my childhood, to create that world in which I could find refuge from the ugly realities we are surrounded by on a daily basis. I try to find Peace there, then I share it with the world.”
Education:
1997-2002: California Institute of the Arts (Calarts) – BFA in Film & Video – Character Animation
1993: Académie Libanaise des Beaux-Arts (ALBA)
Exhibitions:
2014:
Singapore Art Fair represented by Emmagoss art gallery – Singapore
Group Exhibition at the Allée Des Arts project launch in Gemmayzeh, Beirut, Lebanon
Artist residency at the Centre D’Art Contemporain Essaouira, Ifitry Residence D’Artistes. Morocco
Group exhibition of Middle Eastern artists at the Souk event in Amsterdam, organized by Rijks Museum, Stedelijk Museum, Foam Institute of photography and the Concertgebouw- Amsterdam, Netherlands
2013:
Beirut Art Fair represented by Emmagoss art gallery – Biel, Beirut, Lebanon
“Contemporary Armenian Art 2013” , AGBU, Los Angeles, CA. USA
“The Family” – The Guiragossian family artists group exhibition – Anima Gallery Lounge, Doha, Qatar
2012:
“Visual Art Forum III” – UNESCO Beirut, Lebanon
“Lipanan” group show – Hamazkayin Art Gallery, Down Town Beirut, Lebanon
Beirut Art Fair – Emmagoss Art Gallery, Biel, Beirut, Lebanon.
Sursock Museum XXXIst Salon D’Automne – Beirut Exhibition Center, Beirut, Lebanon
2011:
Menasart Fair – Galerie EMMAGOSS – Biel, Beirut, Lebanon
2009:
“Cityscape 2” solo exhibition – Galerie EMMAGOSS – Beirut, Lebanon
“Cityscape” solo exhibition – Bait Muzna Gallery – Muscat, Oman
2008:
Art Paris in Abu Dhabi, UAE
2006:
Art in Lebanon – Musée Paul Guiragossian – Beirut, Lebanon
2005:
Art in Lebanon – Musée Paul Guiragossian – Beirut, Lebanon
2002:
Calarts Producer Show – Los Angeles, CA
2001:
Jabal (Jeunes Artistes Des Beaux-Arts du Liban) 2001 – Zouk Mikael, Lebanon