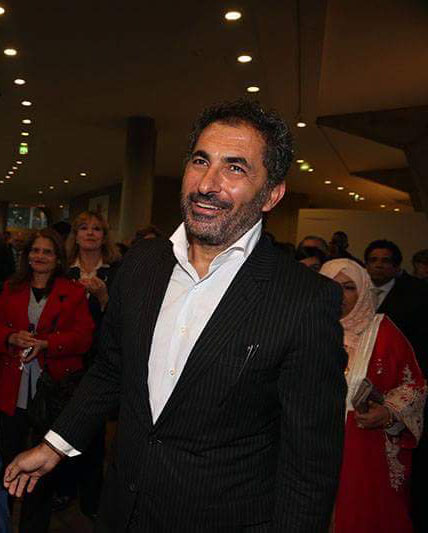 Maher Attar is a highly renowned photographer with 30 years of experience at international photo agencies including AFP, Sygma and Corbis in Paris. He set up his own agency in 2002. In 2006, he founded Art&Privilège, a publishing company specialising in photography, which has published a number of books, and became an Epson-certified “Digigraph“.

A retrospective of his work, A Twenty Year Journey was held in Paris in 2003. On May 18, 2006 his native country of Lebanon honoured him with the exhibition Born in Lebanon on National Heritage Day. At the same time, to mark the International Year of Deserts and Desertification under the aegis of the United Nations Environment Programme, an exhibition of his work was held at the Espace Pierre Cardin in Paris entitled, Auprès de mon Arbre, featuring nine large format photographs celebrating nature, water and life.

Maher’s Bonheur project, inspired from the backstage of famous cabaret Le Lido de Paris, blossomed in the summer of 2006 in the form of a series of exhibitions and a book. Following that, he published Once Upon a Time … Souk Waqif, capturing the mystery and the spirit of the old market in Doha.

Images from the book were exhibited on large format canvas boards in Doha during the 2006 Asian Games and, later, at UNESCO headquarters in Paris. Portraits … Lebanon focused on personality portraits of leading figures from contemporary Lebanon’s economic, literary and artistic sectors.

Lastly, the book DOHArama, a portrait of a desert metropolis between past and present, using anoramic techniques and Lomography, was exhibited at the QMA Gallery in the Doha Cultural Village in 2011. A first presentation of his current Lomography work was presented at Anima art contemporary gallery at the Pearl in Doha in 2013, and was then selected by the MEP and the Arab World Institute to exhibit at the First Photography Biennale of the Contemporary Arab World from November 2015 to January 2016 in Paris.

Maher Attar has developped and run the image bank at the office of Her Highness Sheikha Moza bint Nasser for ten years. In parallel, he commited to organise special projects including, in 2009, a programme designed to teach children from Asian countries the joys and techniques of photography.

Since May 2013, he is devoted to the project Challenges & Reality, sponsored by Education Above All foundation, witnessing the day-to-day circumstances of the children in the hope their right for education. The work was launched at the United Nations headquarters in New York and exhibited at the UNESCO headquarters in Paris.

In the corporate world, Maher Attar works in the field of luxury products. He has worked with, amongst other, Cristalleries Saint-Louis, which belonged to the Hermès company, and for the Spanish architect, Santiago Calatrava.

His work is collected by institutions such as the Qatar Museums Authority, UNESCO and major industrial groups, as well as by private individuals throughout the world.