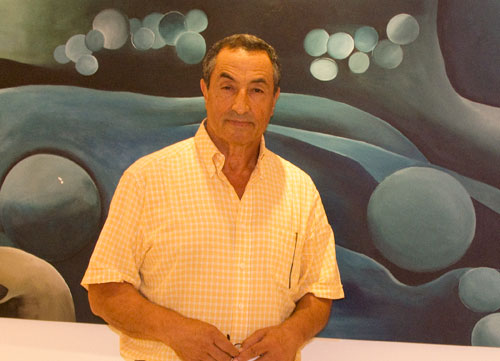 Born in Lebanon, in 1942, Chaouki Chamoun received his Diploma of Higher Studiesfrom the Fine Art Institute at the Lebanese University in 1972. The first in his class, hewas awarded a six-year fellowship to pursue his graduate studies in the United States andrejoin its faculty upon his return. In 1975, he received his Master of Fine Arts fromSyracuse University, N Y. And from 1975 to 1979 he was a full time fellow at the PhDprogram at New York University, NY concentrating on Aesthetics and Studio Art.

His work is internationally acquired, and heavily reviewed in newspapers, magazinesradios and televisions. He is also featured in several art books and his book “The Art andLife of Chaouki Chamoun” was launched by SAQI in London, 2013. As an influentialeducator Chamoun taught art at several universities since 1975 in Lebanon and the USA;and as an acclaimed interior architecture designer with major New York design firms, hishigh-end projects include Saks Fifth Avenue, Bloomingdale, Jordan March andDressbarn in New York, Washington, Chicago, san Fransisco and other US major citiessince 1989.

Chaouki Chamoun registered a distinguished record sale for a living Lebanese artist atChristie’s 2007 auction, and Art Price ranked him in the top 50 newly auctioned Artistsworld wide. And In its 2011 ballot, The Arabian Business Magazine named him one ofthe power 500 most influential professionals Arab in the World. Notably, his works havebeen generously acquired in several charity auctions since 2008 benefiting children ineducational, health and social institutions in Beirut and other Arab cities.